We are only seeing patients with pre-booked appointments. Please phone on 02088867266 on the first instance. We may be able to help you over the phone, otherwise we will make an appointment with you.Thank you for you cooperation and understanding.

At Optitech, we strive to keep to the front end of technology. Over the past 20 years, there has been a rapid advancement in technology for use in every aspect of eye care. In particular, the development of retinal digital cameras and more advanced imaging devices has vastly improved our detection of:

We offer this more enhanced eye examination to both our NHS and private patients at a small additional cost. This imaging is very safe and quick, involving only a few flashes of light. We usually incorporate it with your eye examination, especially if pre-booked.

What is an optomap Image?

The optomap ultra-widefield retinal image is a unique technology that captures around 200 degrees or more than 80% of your retina in a single image while traditional imaging methods typically only show 45 degrees or 15% of your retina at one time.

Getting an optomap image is fast, painless, and comfortable. Nothing touches your eye at any time. It is suitable for the whole family. To have the exam, you simply look into the device one eye at a time (like looking through a keyhole) and you will see a flash of light to let you know the image of your retina has been taken.

Under normal circumstances, dilation drops might not be necessary, but your eye care practitioner will decide if your pupils need to be dilated depending on the health of your eyes. The image capture takes less than a half-second and they are available immediately for you to see your own retina. You see exactly what your eye care practitioner sees - even in a 3D animation.

Early signs of disease can be present in the periphery of your retina and remain undetected for a long time when using traditional methods.

Benefits of an optomap Image

The benefits of having an optomap ultra-widefield retinal image taken are:
- optomap facilitates early protection from vision impairment or blindness
- Early detection of life-threatening diseases like cancer, stroke, and cardiovascular disease
The unique optomap ultra-widefield view helps your eye care practitioner detect early signs of retinal disease more effectively and efficiently than with traditional eye exams.
Early detection means successful treatments can be administered and reduces the risk to your sight and health.

Frequently Asked Questions about an optomap

Why is a retinal exam so important?
Some of the first signs of diseases such as stroke, diabetes and even some cancers can be seen in your retina, often before you have other symptoms. An optomap makes it easier to see them.
Is an optomap safe for children?
Yes. In fact, many vision problems begin in early childhood, so it's important for children to receive quality routine eye care.
What is an optomap?
The optomap is a digital image of the retina produced by Optos scanning laser technology. It is the only technology that can capture 82% view of your retina at one time.
Does it hurt?
No. It is completely comfortable and the scan takes less than a second.
How will optomap benefit me?
The ultra-widefield optomap may help your eye doctor detect problems more quickly and easily. Unlike traditional retinal exams, the optomap image can be saved for future comparisons.
How often should I have an optomap?
This is a decision that should be made by your optometrist . However, it is generally recommended that you have an optomap each time you have an eye exam.
Are there side effects?
optomap images are created by non-invasive, low-intensity scanning lasers. No adverse health effects have been reported in over 150 million sessions. 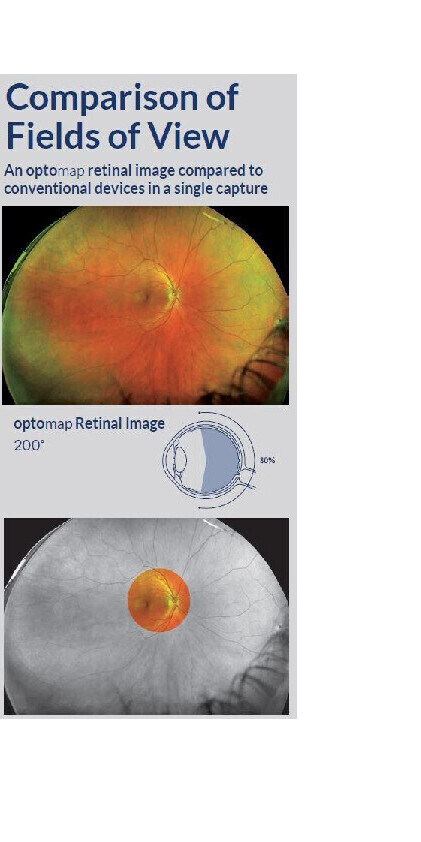 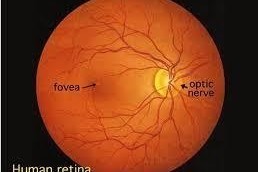 The introduction of digital imaging made a significant impact on the delivery of eye health in optometry. This instrument allows the capture of images of the retina at the back of your eye. These pictures can be viewed instantly on the computer screen, and manipulated using a magnification tool to provide a more in-depth assessment of subtle features.

This technique makes the examination more comfortable for you, as we no longer need to peer into your eyes at close proximity for such a lengthy period of time.

The special filters used by the retinal camera afford the advantage of better detection of 'moles' in the eye (technically called 'naevi'!) that can be more easily missed using traditional examination techniques. Retinal imaging also enables us to detect better early signs of small haemorrhages and blockages in your retinal capillaries that can indicate high blood pressure, high cholesterol or diabetes. It is now the mainline method of screening and monitoring diabetic eye disease. 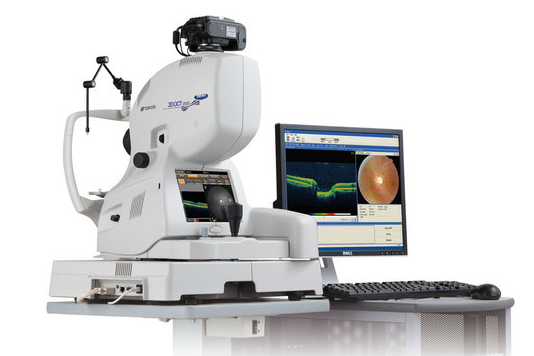 This latest technology has revolutionised the examination of the most important features of the retina, namely the optic nerve (structure that carries information back to the brain), and macula (central part of the retina).

Scans captured using the OCT provide invaluable information for both the early detection, and diagnosis of various eye conditions that may have otherwise been missed until a later stage in the disease process. By investigating deeper layers of the retina in a 3-dimensional image, the device looks beneath the surface, much like an ultrasound scan. Images can be acquired within a few seconds, in a simple and comfortable manner, with the patient experiencing light flashes during the measurement.

Our optometrists have undertaken vigorous training to analyse scans precisely, working alongside local ophthalmologists to inform decision-making and referrals for further investigation. OCT scans can be carried out for patients of all ages, but we recommend in particular, the following groups:

Individuals aged over 40 years, as these persons are more at risk of conditions such as glaucoma and macular degeneration
Those with a family history of age-related macular degeneration, glaucoma, or diabetes
Where results of previous tests in the eye examination warrant more frequent monitoring of the retina (e.g. a mole at the back of the eye)
As a baseline measurement for any age group, so that there is a reference for us to compare against if any future symptoms or conditions arise
The prognosis for conditions such as glaucoma, diabetic macular oedema and macular degeneration is better when detected and treated at an early stage to prevent further loss of vision. 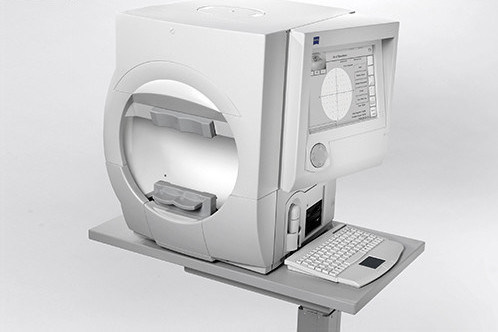 This is a tool for measuring the human visual field, it is used by optometrists, orthoptists and ophthalmologists, particularly for detecting monocular visual field.

The results of the Analyser identify the type of vision defect. Therefore, it provides information regarding the location of any disease processes or lesion(s) throughout the visual pathway. This guides and contributes to the diagnosis of the condition affecting the patient's vision. These results are stored and used for monitoring the progression of vision loss and the patient's condition.

This equipment is used in early detection of Glaucoma and other optic nerve related conditions. It is the hospital gold standard visual field equipment for detecting and monitoring changes in the optic nerve. 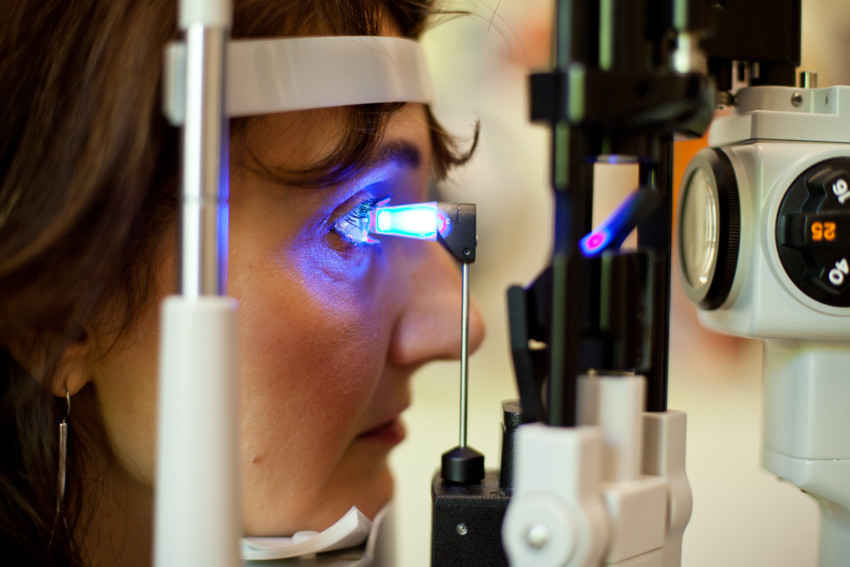 This provides a more accurate eye pressure measurement relative to the standard 'puffer' or the non-contact tonometer. It is the main choice of equipment preferred by hospital eye specialists.

Tonometry is generally performed upon an anesthetized ocular surface.The tonometer device lightly touches the surface of the eye, ever so slightly indenting the cornea. The resistance to indentation is measured by a precisely calibrated pressure sensing device, the tonometer. 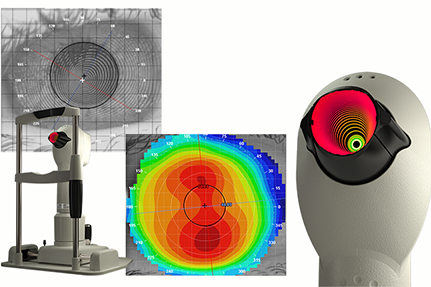 This non-invasive medical imaging equipment maps the surface curvature of the cornea, the outer structure of the eye. Since the cornea is normally responsible for some 70% of the eye's refractive power, its topography is of critical importance in determining the quality of vision and corneal health.

Our Practice
Our Team
Our Guarantees
Testimonials

Simply call the team at 28 Chase Side, Southgate on tel: 0208 886 7266, or email practice@optitechopticians.com or request information below, or just pop in to see us.